Minutes after the debut of this year's Pepsi Super Bowl Halftime Show, viewers pored over the details and Compton reference points. The show's mastermind shares the original plans with The Hollywood Reporter and how it pays homage to South Los Angeles and Dr. Dre. 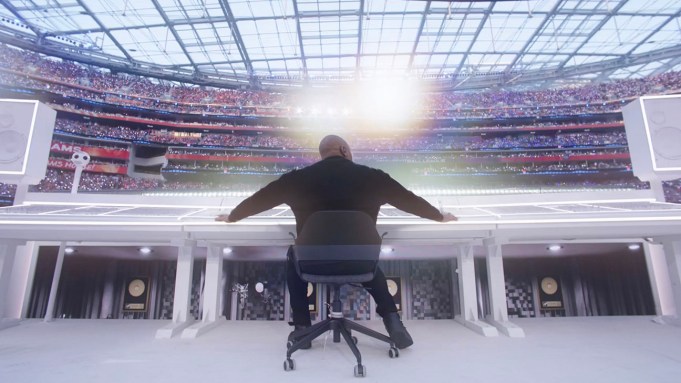 Es Devlin is an artist and designer, talents that can be distributed across many disciplines, and her website lists dozens of credits that show how far she has stretched. Known for large-scale performative sculptures and set pieces, Devlin has worked with superstars like Beyoncé, Adele, Kanye West and The Weeknd on arena tours, collaborated with luxury houses Chanel and Louis Vuitton on installations and fashion shows, respectively, and has designed both the opening (Rio) and closing (London) ceremonies of the Olympics.

But it was a large-scale work titled Memory Palace that caught the eye of Dr. Dre during their first meeting to discuss this year’s Pepsi Super Bowl Halftime Show. The piece, a reimagined model city map of the world that was on view at Pitzhanger Manor & Gallery in London’s Ealing neighborhood, plots the location of 73 millennia in significant shifts in human perspective. “Dre was immediately interested in the idea of ‘placeness,'” Devlin shares with The Hollywood Reporter. “He sensed that Compton would be another protagonist in the work and that we could etch a map of Compton on the global Super Bowl stage.”

hat’s what they did. Devlin collaborated with production designer Bruce Rodgers to re-create buildings, businesses and vibes unique to Compton. The brightness of it all, they hoped, would translate well to a Hamish Hamilton-directed Super Bowl spectacle inside SoFi Stadium while the sun was still shining on headliners Dre, Snoop Dogg, Kendrick Lamar and Mary J. Blige, with surprise appearances from 50 Cent and Anderson.Paak, not to mention legions of dancers, a parade of lowriders and an overlay of the field that featured the full network of Compton streets.

Below, Devlin shares sketches and images with THR while detailing the creative process behind this year’s halftime show, seen by 112 million people and counting. Highlights include why it was so important to feature landmarks like Tam’s Burgers, Eve After Dark and the Compton Courthouse, the significance of ‘Dre Day’ cardboard boxes, and the reason the show opened with Dre in the studio: “The recording studio is Dre’s link and meeting point with all the other artists.”

“During our first Zoom meeting, we showed Dre a number of projects as examples of directions we could choose to take. Both Dre and Jimmy Iovine were drawn more to studio art installations than previous shows. Dre has just had his portrait painted by Kehinde Wiley for the Artists Inspired by Music: Interscope Reimagined exhibition at LACMA, and he was interested in approaching the Super Bowl as a narrative art installation as well as celebratory performance. We knew the halftime would be taking place in daylight, which might suit sculpture or parade more than a light show.” 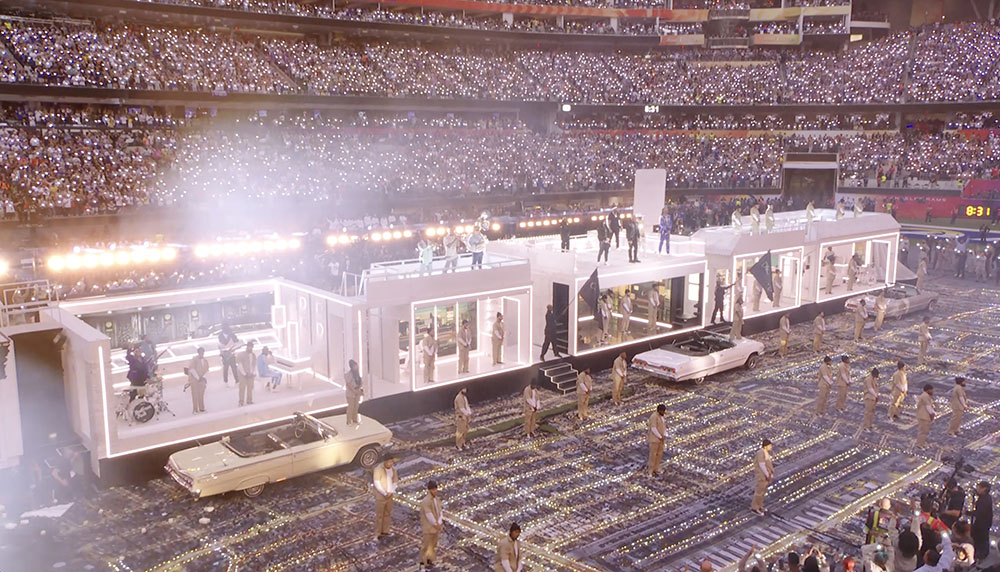 “The installation Dre was drawn to in that first meeting was a 2017 artwork called Memory Palace. It is a reimagined model city map of the world at Pitzhanger Gallery in Ealing, London, and it plots the location of 73 millennia of significant shifts in human perspective. Dre was immediately interested in the idea of placeness. He sensed that Compton would be another protagonist in the work and that we could etch a map of Compton on the global Super Bowl stage.” 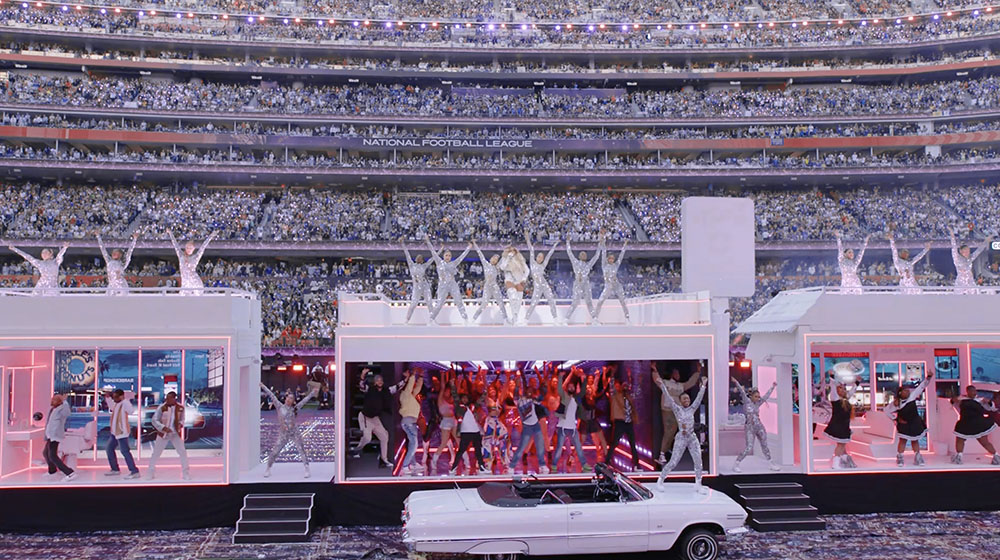 “The choreography and stage direction is by the legendary choreographer and director Fatima Robinson. Many of the central ideas of the show were co-conceived with Dave Free, Kendrick’s close creative collaborator. Bruce Rodgers is the veteran Super Bowl production designer who masterminded the design to be able to appear within eight minutes and disappear within six minutes, an immense challenge requiring military precision and crew choreography. The setup is, in fact, a show in its own right. We noticed very few of the audience leaving their seats as all stayed to watch the intricately staged crew performance. The work is filmed by the world’s leading live cinematographer, Hamish Hamilton, and lit by Al Gurdon. The costume designer is Lila Nikole. The producer is Jesse Collins and his co-producer Dionne Harmon along with Desiree Perez, CEO of Roc Nation.”

“Detroit poet and rapper Eminem starts his performance of ‘Forgot About Dre’ hidden within the courthouse, or jail, as Dre listens from his recording studio. Eminem busts out of the building, sending pieces flying, and makes his way over the recording studio to join Dre, Anderson.Paak and the rest of the band to perform ‘Lose Yourself.’ It was the first hip-hop track to win an Academy Award for best original song. He performs as a cast of Compton school kids leap to their feet and flood the field. The field cast is drawn from local Compton and South L.A. dance and performance groups. The Compton Courthouse, including its jail, was designed by Harold Williams. It is the tallest building in Compton — the city’s only skyscraper — and is visible for miles. It is also featured in Straight Outta Compton as the place where Compton rapper Eazy-E bails a young Dr. Dre out of jail.”